Posted by Michael Jacobson on Wednesday, November 20, 2013 · Leave a Comment 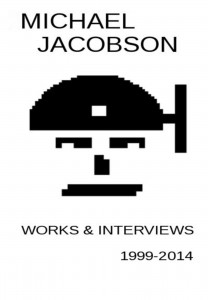 This book is a collection, by visual novella writer Michael Jacobson, of his asemic works: The Giant's Fence, Action Figures, and interviews from the years 1999-2014.

Michael Jacobson is a writer and artist from Minneapolis, Minnesota USA. His books include The Giant’s Fence, Action Figures, Mynd Eraser, and The Paranoia Machine; he is also co-editor of An Anthology Of Asemic Handwriting (Uitgeverij). Besides writing books, he curates a gallery for asemic writing called The New Post-Literate, and sits on the editorial board of SCRIPTjr.nl. In his spare time, he is working on designing a cyberspace planet named THAT. Recently, he was published in The Last Vispo Anthology (Fantagraphics), had work in the Minnesota Center for Book Arts exhibit: Directed, and was interviewed by SampleKanon and Asymptote Journal.

It is ready for pre-sale now, and will be available at Amazon, Barnes & Noble, and Ingram sometime in early 2014. Here is the link to buy a copy: http://www.lulu.com/shop/michael-jacobson/works-interviews-1999-2014/hardcover/product-21301323.html