signs of life of signs

Posted by Marco Giovenale on Monday, March 9, 2015 · Leave a Comment 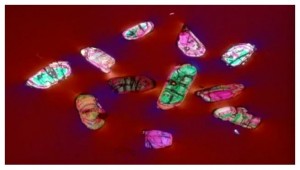 Maybe (linear or nonlinear) "experimental writing" and "visual poetry" are simply first definitions of the vast living environment of works made by the worldwide community of people involved in asemic (and so pansemic) writing and in the making of abstract stuff.

And: about the words "writing" and "abstract" —maybe they’re narrow definitions of areas of signs. A suitable term could (simply) be “sign” indeed.

The life of signs is perhaps the ‘thing’ we try to deal with. A sign is an entity which, in itself, does not have an actual "itself". It absolutely conveys something else. It’s not narrow, it’s an arrow. It’s a non-"quid" referred/referring to some (other) "quid". And so: the reference or transfer or passage may be somehow / somewhere broken. And this fact is the alpha in "a"/semic.

[And —at the same time— any “alpha” is a “pan”: any limit is also a secondary path or crack, a way for widening the view]

The incomplete or complete rupture or fracture of a (still presumable) transitive line (of the transmission of meaning) makes us call the sign an “intransitive” one. Or a “partially transitive” one.

For example: a signal or warning, on an unknown road and land, telling us something we don’t catch at all. A flashing light. We stare at its colours, but we can’t translate them into some kind of knowledge about an actual situation we ought to react to. By the way, we’re mesmerized by its effort in telling us something (or —better— its clear effort to move an unclear cloud of meaning[s] from A to B). We miss the point; still we go on staring at some vague (say abstract) point.

Shadows show something we don’t catch; still we cannot stop watching, and we don’t.

We’re almost 4 thousand years far from the birth of writing, but the written signs & glyphs & traces in caves are definitely older. So much older. In “Caves of Forgotten Dreams” Werner Herzog shows us the (partially intransitive) signs of men who lived 30,000 years ago. It’s not “writing”, it’s (perhaps) carving / painting signs. Figures. Not to mention the recent discovery of a carved shell from 540,000 years ago: http://www.nbcnews.com/science/science-news/old-master-540-000-year-old-shell-has-oldest-ever-n261171

But —going even further into the past—  let's get to a time where not only the human race but the very beginning of life itself had not yet appeared on our planet. Fragments/crystals of zircon (here a pic from a documentary: http://www.youtube.com/watch?v=Eu16701JhOo) found in West-Australian rocks dating back to 4.4 billion years ago seem to reveal the presence of water on Earth in an incredibly early stage of its history: and we may consider these crystals and fragments as “signs” (of/from the ur-environment): partially transitive ones, made not by human hand, but by nature —Earth— itself. (Signs addressed to no one, to no one’s eye)