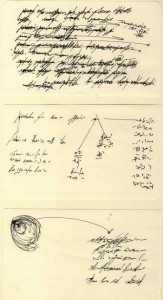 1
I started drawing=writing "sibyls" in 2005-2006. They were not imagined as a structured series, but as single messages/leaflets in English. And maybe, at first I didn't think I had to define them, nor give them a name at all.

They were born as lines/verses you could actually read. They were arranged in square grids.
But I started calling them "sibille" (in Italian), "sibyls", almost soon.
This was also due to my respectful feelings of gratitude and admiration toward Emilio Villa's work.
He made drawings, visual poems, installations and engravings based upon his multilingual sibylline texts. He also knew (and said) that a sibyl is something you lose. You write it and soon you send it away. It belongs to nobody. (It’s a form of dépense, too. I think so.)

(A performance Villa made in the 40s ––in 1947 if I remember well–– consisted in writing poems over some stones he immediately threw into the river Tiber, losing them, leaving them to the flow.)

2
I made my "sibyls" grow as knots of signs ––sick with some serious lack of (fixed) meaning.

I'm interested in asemic writing: a way to defy or go beyond any narrow range of sense.

A "radiance of meanings" is what I want to deal with. (And a darkening ––too.)

3
Now the sibyls are neither "calligraphy" attempts nor "alphabetical" chaotic lines. I often add incomplete or blurred drawings to frantic hysterical lines of écriture.

(Where “to write” is always “to overwrite”.)

.
4
The sibyls demand for a meaning and at the same time they elude any expectation, deluding the reader with ghosts of signs. They are the vibration or ground radiation of a difference/différance ––more than a concrete & relaxing "thing".

The reader wants to ask them something. But he has found them on his way (far from) home: and they are actually asking him something. But ––objet trouvé–– a sibyl is a merzbau of indecipherable traces and absences.

5
What about the stuff a sibyl is made of? In a few words, the sibyls are made of trivial notes, trivial quotes, irony, shadows of statements, memories, aphorisms, micro-tales, eavesdropping, low-res ideas, immortal / immoral declarations, boring descriptions, thick prose pieces, verses, letters, but

––all of the lines are superimposed. …Diverging, cutting…
This is another way of defying the hunt for a (fixed/sure) meaning. There’s no arrow pointing North. (There’s no North.)

6
If the tradition of sibylline oracles says the words on the leaflets of Sibyl were a prediction of the future or an account of past events, my materialistic "asemic sibyls" can only deal with the past or the present. And they both are ever-changing, blurred or black, like the future.

The sibyls rip and tear the present and the past ––as to give them a multiple code in multiple fragments, dérives,

7
In 2008 La Camera Verde hosted a solo exhibition of my sibyls, and published the book Sibille asemantiche: it is here:

This is a text I wrote before 2013 (& revised in 2013):
I used it as a kind of note for/in "Asemic Sibyls"
(published by RedFoxPress, thanks to Francis Van Maele)
http://www.redfoxpress.com/dada-giovenale.html

The image on top is a photo of the three sibyls I sent in 2011
to Dirk Vekemans, for the Klebnikov Carnaval