by Clare Smith and Gary Shipley

I’m interested to know how it is drawing can be divorced from "doing," how the activity of drawing comes to be seen as a postponement.

I really like that idea. For me drawing has always been something to do with betweenness, not preparation for painting or sculpture but lying between the two with the possibility of going in either direction.

How important to your work as a whole is the concept of "practice," of somehow denying yourself the opportunity to embark on work that can be properly finished? (Something your use of practice paper seems to reinforce.)

I think it is very important, though I hadn’t seen it quite like that. I was thinking of practice and repetition as an attempt to achieve perfection, something that is impossible. Behind the idea of practicing to become perfect though is the idea of correcting errors - I like to incorporate “error” in the work; so if I am trying to stay within the squares of the practice paper but accidentally go over a line, then I keep it, I mean I don’t start the whole drawing again but I will try to “correct” the gesture by continuing to try to keep the marks within the squares. Perhaps because of the link between practice and perfection I like to work in a way that deliberately undermines that link by taking paper that will tear easily, that is not archival, on which the drawn grid is, on close inspection, anything but a perfect grid.

I like the idea of contingency, a sense of the “what if.”  If I think about how a work might be finished before I’ve even started then there is no point in starting.

Practice is also about repetition – in French repetition is to rehearse – and so about pushing oneself. There is nearly always an element of pushing myself to the limits of my physical impairment in my work, making pain also an important part of the actual making. 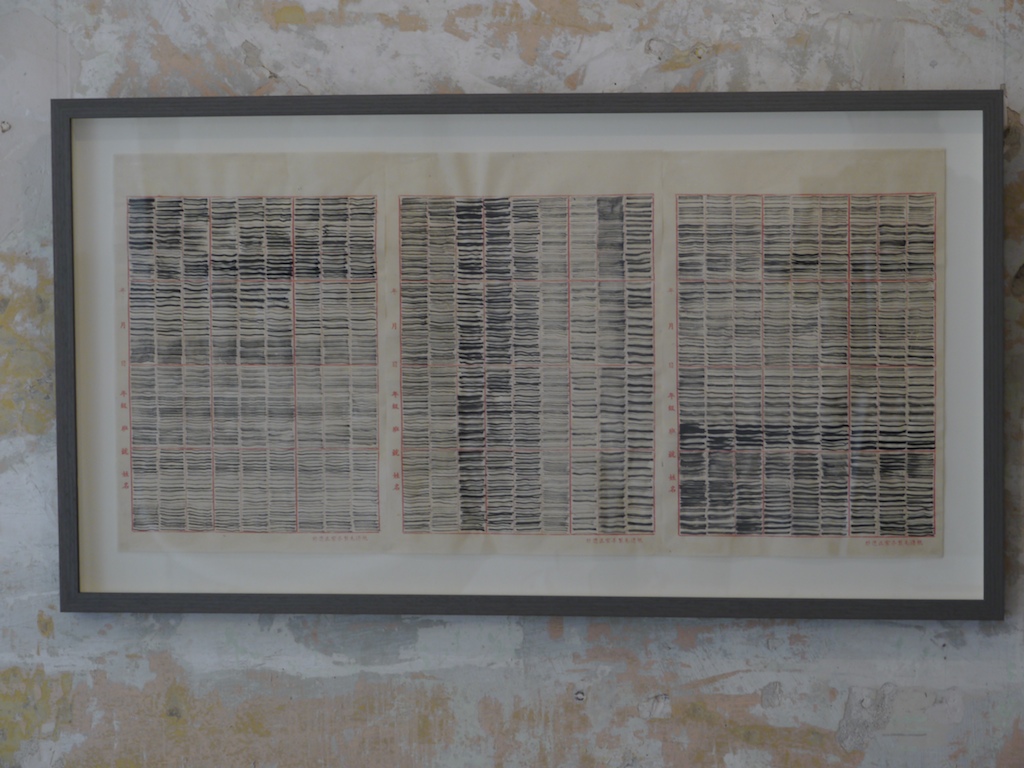 Would you agree with Pessoa’s claim that “to emerge from the realm of doubt and obscurity” is somehow catastrophic?

I’ve just looked him up so have to confess to not knowing Pessoa’s writings. But I can relate to a desire to remain in the realm of doubt and obscurity, - of not knowing and staying in the dark, because to fully know would be the end.

Grids form an integral part of your recent work. Would you say they provide a necessary intermediary between you and the work, a concrete extension of, say, the way in which Richard Serra employed mesh screens in the 1980s?

Interesting that you pick up on Richard Serra whose black paintstick drawings I really love. The readymade grid is an intermediary in the sense that it slows or interrupts gesture.  Serra too tries to reduce gesture in a way with the mesh screens. For me, gesture will always out, somehow. Even if one tries to make anonymous marks, or use anonymous structures, something of the self and its vulnerability will always be in the work. 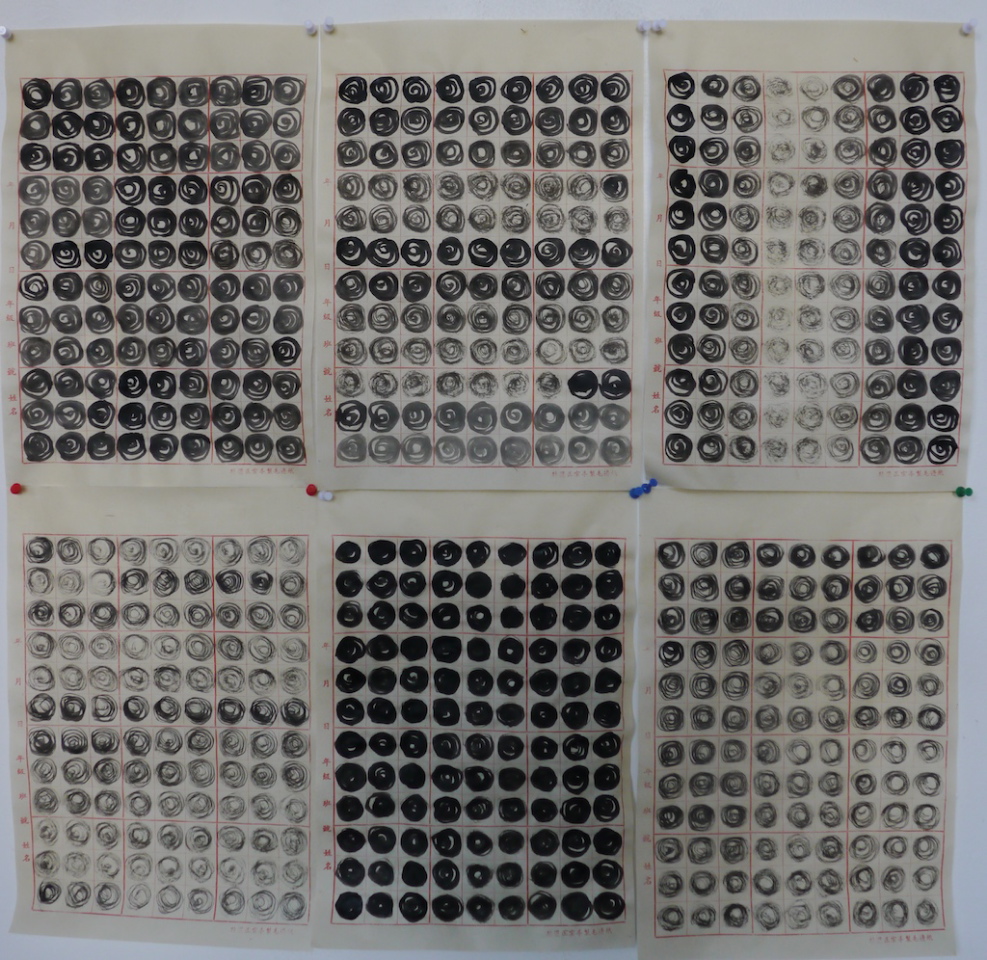 Do you see your use of grids as being in opposition somehow to Deleuze’s conception of the grid, as territorialised "State Space," inside which movement becomes fixed and tribal? Or is this something you’re expressing with your "Collapsed grids"?

Yes, maybe I am trying to counter the fixity of the grid. In some pieces I deliberately cut across the grid lines – often my work involves some kind of violence to the surface. A grid is a way of organising a surface so cutting across the grid or making the grid less rigid – not using straight lines - I think brings a less technological more human way of making one’s way through a place. I’ve recently been reading Tim Ingold’s Brief History of Lines. 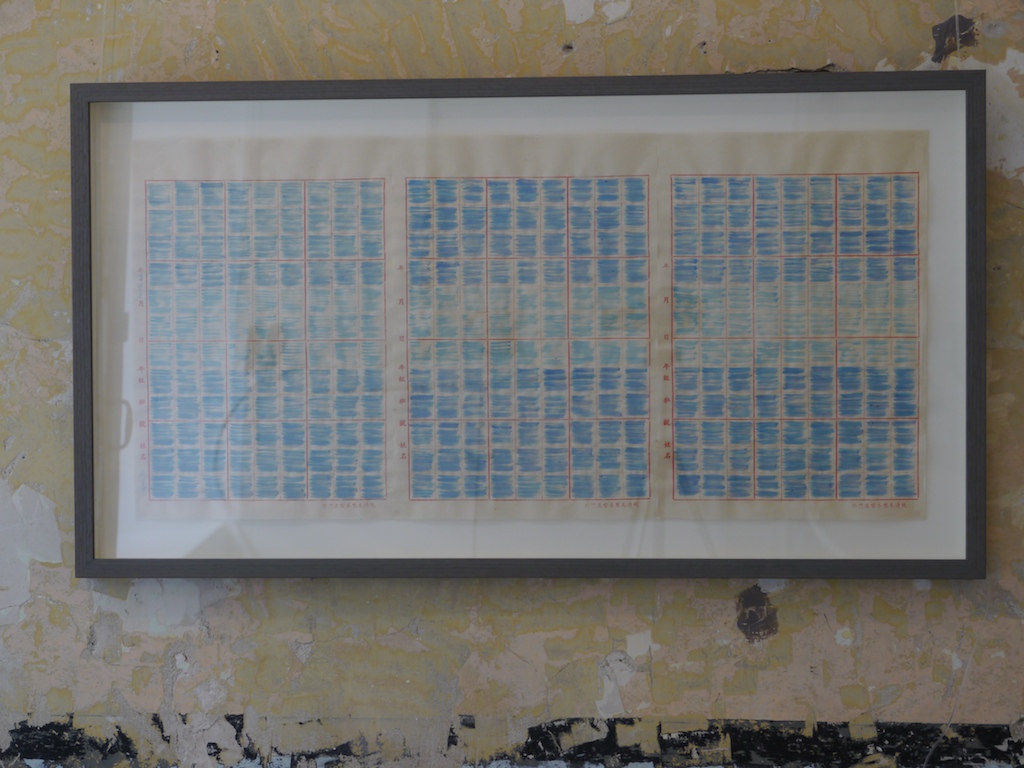 With works like "Once limpid sea", "The scent of sandalwood", "This way and that", "Letter home", "Moments II" and "Waiting to hear," your methods and the products themselves blur the distinctions between drawing and writing. Do you think of these works as writing, asemic or otherwise? Would you say Chinese script has been instrumental in your desire to merge the two?

I think you are right about the blurring of the distinction – also it is a way of suggesting narrative. Ingold suggests that Chinese script maintains its connection with gesture in a way that Western letters do not.

My parents’ house is full of Chinese artefacts including paintings with calligraphy so it is something I’ve grown up with.

I did learn Chinese script when I studied Chinese at Cambridge, though had not learnt it as a child. I do think of the works partly as writing – I often feel that I don’t fully have a language that can say what I want to say. In a sense, either Chinese or English could have been my mother tongue – I spoke a dialect of Chinese as a young child but lost that language as I grew up and moved away from Malaysia where I was born. When I then studied Chinese as an academic subject, my tutors were amazed at how easy I found it, so maybe there were traces of the structure of Chinese stored away somewhere in my brain. 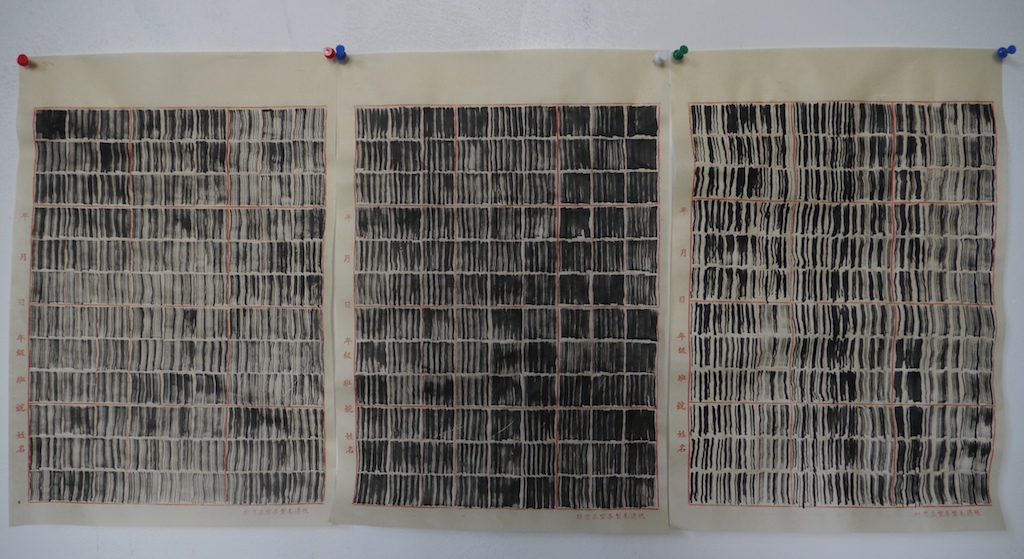 Can you explain the thought behind the emphatic erasures in your "Collapsed grids"? And what was the motivation behind layering those erasures in "(prototype)"?

I wonder whether they are truly erasures as I have cut the squares out, so unlike a crossing out, the erased element is not really present but somewhere else. I have a small boxful of squares of paper that I am wondering what to do with. I think I might sew them back into the gaps. I am interested in the idea of presence – how the subject might be present even within apparent absence. The layering is about creating depth – going into the surface. As well as layering there is a slight shift so each sheet of paper is slightly displaced. Maybe it is about trapping the eye – not letting the eye rest only on the surface. 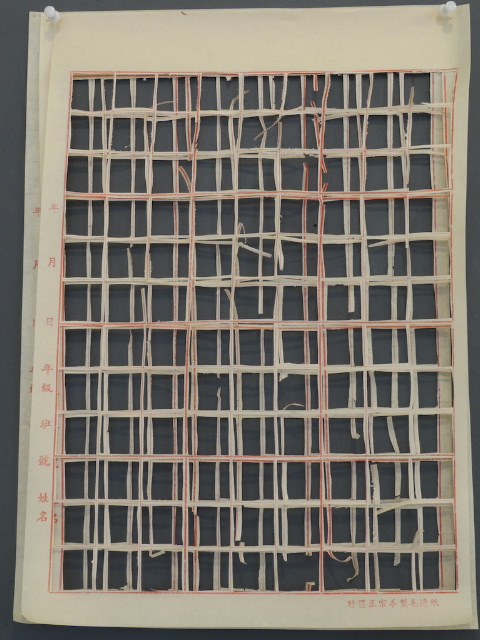 The removal you mention is exactly what I was getting at with "emphatic erasure" i.e., erasure as a complete obliteration, as the work towards the nothing left, as it were.

Work towards the nothing left. I really like that. Is nothing nothing or is there a somethingness about nothing? In cutting out the squares and layering the leftover sheets of paper, something else gets created, but it isn't quite conjuring out of nothing - it's more like removing so there is almost but not quite nothing. There is nothing in the cut-out part but some of the paper is left. It would be interesting to see how fine I can make the cuts so that there is even less paper left.

Once the squares are cut out, the space that is left is still delimited by the remaining paper – still framed. The sheet of paper becomes lace-like and the grid lines become flexible. The method of cutting is to use the blade of the knife until it blunts and so the paper tears and then to go on a bit further until it will hardly cut at all.

I try to hold everything together somehow. 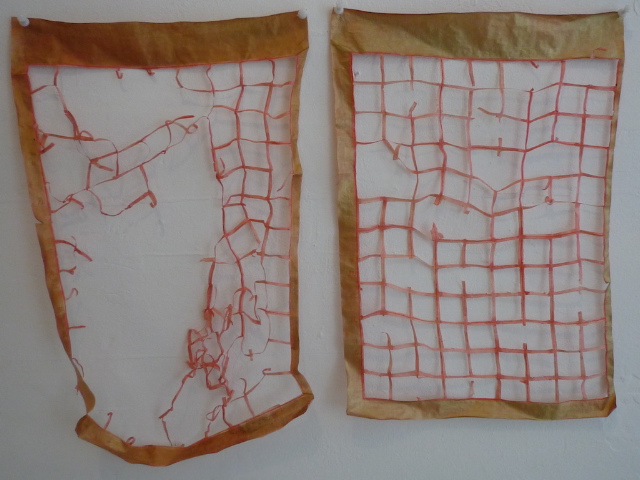 Clare Smith lives and works in Kent. Her work is concerned with suggested subjectivities, narratives and ideas around the nature of experience. “Drawing for me is betweenness, somewhere on the line that posits sculpture at one end and painting at the other. The idea of betweenness also relates to my personal biography, namely my mixed Chinese/English heritage. The condition of being between cultures and losing a language, namely Chinese, is one that is not mine alone; plenty of others have gone before me, and it is not interesting per se. What is interesting is the way writers like Edward Said and Helene Cixous, for example, have, in comparable circumstances, created an identity in writing, in their work: work thus becomes an alternative space for identity or a self-consituting process. As Kate Love puts it, “the work also produces you” My drawings are a way of slowing down time, finding a quiet place to be, grounding my sense of self. I start with a line or mark and repeat these. I also like to score or cut the paper, which has to do with scarring and wounding as well as with the delicacy of Chinese paper cuts. Repetition is used both in the process of making the work and as a formalist strategy. Repetition together with visuality is a key aspect of trauma discourse: traumatic events, unspoken and unspeakable – but intensely visual - remain in one’s guts, in the recesses of personal, individual and collective memory, always there as a threat, awaiting their moment of return. “I am a memory come alive” is how Kafka describes himself, positing the idea that the self arises out of memory, a statement that resonates, that suggests we are living, breathing memories, animated recollections of our own past, but always moving into the future through the present, where according to Bergson the body is “an ever advancing boundary between the future and the past.”