The cuts and other technical information included in the text of these three cinépoems should not be understood as oblique references to film direction; they were merely intended to facilitate the creation of a temporary state of mind that the memory destroys along with the act of reading. 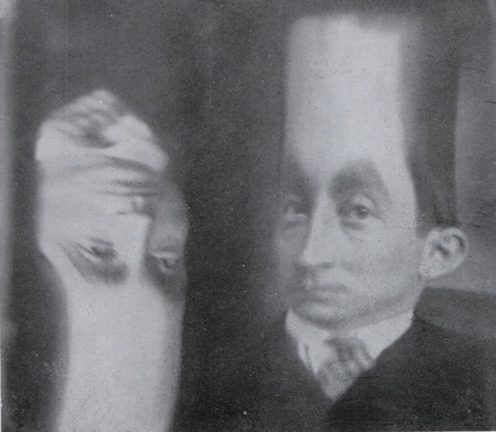 Typical of early 20th-century "scenarios," Fondane presents his "trois scénarii," including "eyes wide open," as ordered lists.2 (All three cinépoems are included in SCRIPTjr.nl's "Lesescenarios" special section.) I've maintained this formatting as well as Fondane's term "cinépoem." Concerning the latter, there's no elegant, literal equivalent in English, of course, though Fondane's term does neatly presage Scott Fitzgerald's use of the phrase "screen poet" a decade later.3 Leaving it untranslated also adds an additional term to the already crowded field of terms that refer to "readerly filmscripts" -- "closet film," "closet screenplay," "Lesescenario," &c. -- and thereby further illustrates the genre's amorphous nature. When I felt they would create clumsy translations and wouldn't unduly alienate English speakers, I've left other French terms untranslated as well (e.g., "café" and "Bar-Tabac"). In the final scenes, needing to distinguish the stroller from the assailant, I introduce the French word "flâneur," which, whatever it may lack for many English speakers, possesses a good deal of elegance and succinctity. (In the Google age, such terms are also quite effortlessly defined.)

Unusual among Lesescenarios and, indeed, read drama of any time period, are Fondane's use of the terms "ter," which I've assumed is an abbreviation for "terminer" ("end"), and "bis" ("repeat"). Fondane appears to use these terms as equivalents to the kinds of repetition markers one finds in musical notation. The duplication of numbers in Fondane's ordered list plays a part in this system as well. When s/he encounters the word "bis", I assume Fondane intends his reader to return to the first entry with the same number and read the set again before proceeding. In this way, "bis" serves as a 𝄇 and/or 𝄉, the first number in a repeated set as a 𝄆 or 𝄋. For more extensive "scene phrases" that involve more than one repeated number, Fondane seems to use "ter" as a 𝄂 or "fine" marker.

Since these markings are highly idiosyncratic, it's unclear whether Fondane intends his reader to repeat a given scene phrase once, as musical notation implies, or multiple times. The relationship between the repeated intervals -- scenes thirty-three and thirty-four -- is similarly opaque. One can interpret this and the cinépoem's other ambiguities -- e.g., Fondane's repeated use of "etc." -- a number of different ways: it helps create a highly subjective text that invites experimentation and individualized reading experiences; it adds another, formal layer of surrealism to the text; it allows Fondane to challenge the ways in which texts are ordinarily presented and read; and it helps Fondane emphasize the stanza-like poetics of his cinépoems' scenes. However, perhaps most importantly for Lesescenario studies, by sacrificing the script's directive objectivity and syuzhet clarity, which all production-oriented filmscripts are expected to have, Fondane's technique also weaves a strong anti-production sensibility into the text. (This is to say nothing of the various "special effect" challenges and technical impossibilities Fondane's script would have presented to early 20th century filmmakers.)

Concerning punctuation and layout, following Fondane's example, I don't begin sentences with capital letters or end them with periods, save in the last stanza, per the text's example, and I use commas only when absolutely necessary, that is, for reasons of clarity, in cases of apposition and zeugma, when separating coordinate adjectives, and, unlike Fondane, items in a list. Like Fondane, I never use them to offset introductory or subordinate clauses or to join independent clauses. In fact, Fondane avoids commas almost entirely, preferring instead the absence of punctuation or speed-oriented marks like semi-colons and dashes. I've privileged this feature of the text, even if it means periodically (and inconsequentially) torturing syntax and literal fidelity. Additionally, I assume Fondane's use of a space before colons -- " ... des formes ternes : enseignes ... " vs. " ... des formes ternes: enseignes ... " -- is more than accidental, namely, that it indicates some sort of longer-than-usual pause or a film-like scene and/or "camera eye" transition. As such, I've maintained the Baze edition's unusual style. I've also broken lines in single list items according to the text's example. At times, it uses carriage returns to split two semi-autonomous phrases. In other cases, line breaks occur only as a result of the page's right margin. I've done my best to discern different instances, ignoring the latter and presenting the former as faithfully as possible.

I have departed from the text in a few minor ways.

First, I've silently emended certain inconstancies. For example, " ... , etc." appears in scene twenty-eight vs. " ... etc" in scene forty-six, and I've standardized instances per the first example. Second, following SCRIPTjr.nl house style, and assuming the difference creates a negligible variation, I've added a space before all ellipses -- "Paris Le ... " vs. "Paris Le... " -- and before and after all dashes: " ... -- de trois -- ballet mouvementé ... " vs. " ... -- de trois --ballet mouvementé ... " The latter also standardizes dash presentation across Fondane's three cinépoems. Neither "horizontal bar" nor "mtasipoj" collapse the space after dashes, which leads me to believe the "eyes wide open" instances are either typos or printing errors.

I've also corrected a handful of, what I consider, ambiguous (pro)noun references, translating the "elle" in stanza 122, for example, as "the woman" rather than "she." Finally, since Fondane's text is right justified, it's difficult to tell if the wider-than-usual word spacings that periodically appear in the text are intentional -- perhaps serving a purpose similar to Fondane's use of spaces before colons -- or merely the result of typesetting. Because they appear fairly randomly and, at times, in the middle of complete clauses, scenes, and thoughts, I've assumed the latter and haven't preserved instances of nonstandard word spacing in my translation.

Finally, my thanks are due Nicholas Roth both generally, for an engaging, ongoing Lesecenario conversation, and specifically, for bringing Fondane's cinépoems to my attention.

I dedicate this translation to him and my late grandfather: paterfamilias, patriote, francophone, homme de lettres.

Benjamin Fondane was a Romanian-French poet, critic, and philosopher, also noted for his work in film and theater. During and after World War I, he was active as a writer, impressario, and manager of the theatrical troupe Insula. Along with 700 other detainees, Fondane was murdered on or around October 2, 1944 in the gas chamber of the Auschwitz II–Birkenau concentration camp, just four months before its liberation by the Red Army. His closet screenplays are featured in SCRIPTjr.nl's "Lesescenarios" special section.